The Shira Route is a little used trail that begins near Shira Ridge. It is nearly identical to the Lemosho route. In fact, Shira was the original route and Lemosho is the improved variation. Although Shira is a varied and beautiful route, it is less favorable than its successor due to the relatively high altitude of Shira’s starting point, which is accessed quickly by vehicle. It is possible that climbers will experience some altitude related symptoms on the first day while camping at 11,800 feet.

The route approaches Mount Kilimanjaro from the west, beginning with a long drive from Moshi to Shira Ridge. The vehicle bypasses the rain forest zone and the hiking trail begins on Shira Ridge. The Shira route crosses the entire Shira Plateau from west to east in a pleasant, relatively flat hike. Then the route traverses underneath Kilimanjaro’s Southern Ice Field on a path known as the Southern Circuit before summiting from Barafu. Descent is made via the Mweka route. 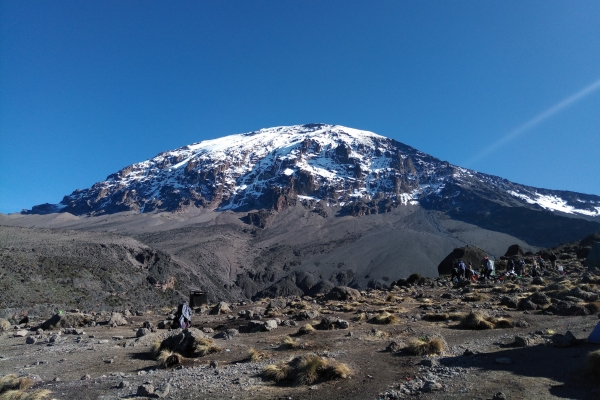 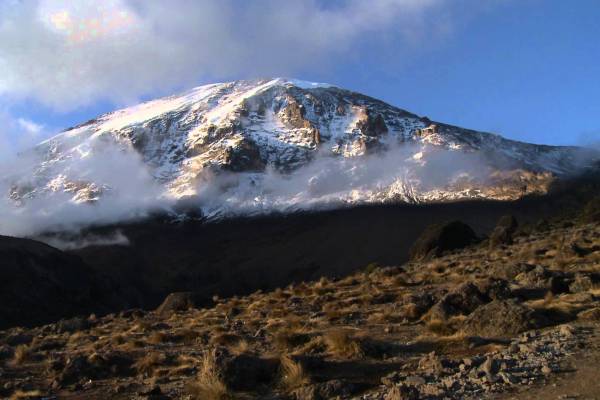 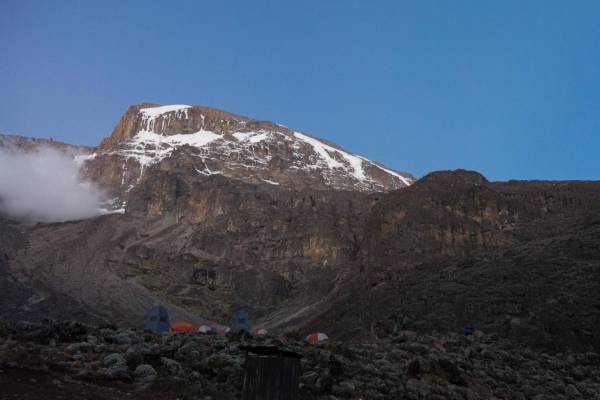 Elevation: 11,800 ft to 11,800 ft Distance: 4 km/2 miles Hiking Time: 1-2 hours Habitat: Heath We depart Moshi for Londorossi Gate, which takes about 4 hours; here we will complete entry formalities while guides and porters prepare equipment. We then continue to drive up a steep path to the Shira Gate where we will begin the hike. The trek starts through shrubs and giant heather until we reach Simba Camp.
2

Elevation: 11,800 ft to 12,500 ft Distance: 6 km/4 miles Hiking Time: 2 hours Habitat: Heath Today is a fairly easy day to help with acclimatization. We begin by exploring the grassy moorland and volcanic rock formations on the plateau. Then we take a scenic path to the Shira Cathedral, a huge buttress of rock surrounded by steep spires and pinnacles, before settling at Shira 2 Camp.
3

Elevation: 13,044 ft to 13,106 ft Distance: 5 km/3 miles Hiking Time: 4-5 hours Habitat: Alpine Desert We begin the day by descending into a ravine to the base of the Great Barranco Wall. Then we climb the non-technical but steep, nearly 900 ft cliff. From the top of the Barranco Wall we cross a series of hills and valleys until we descend sharply into Karanga Valley. One more steep climb up leads us to Karanga Camp. This is a shorter day meant for acclimatization.
5

Elevation: 13,106 ft to 15,331 ft Distance: 4 km/2 miles Hiking Time: 4-5 hours Habitat: Alpine Desert We leave Karanga and hit the junction which connects with the Mweka Trail. We continue up to the rocky section to Barafu Hut. At this point, you have completed the Southern Circuit, which offers views of the summit from many different angles. Here we make camp, rest and enjoy an early dinner to prepare for the summit day. The two peaks of Mawenzi and Kibo are viewable from this position.
6

Elevation: 15,331 ft to 19,341 ft Distance: 5 km/3 miles Hiking Time: 7-8 hours Habitat: Arctic Uhuru Peak to Mweka Camp Elevation: 19,341 ft to 10,065 ft Distance: 12 km/7 miles Hiking Time: 4-6 hours Habitat: Rain Forest Very early in the morning (around midnight), we begin our push to the summit. This is the most mentally and physically challenging portion of the trek. The wind and cold at this elevation and time of day can be extreme. We ascend in the darkness for several hours while taking frequent, but short, breaks. Near Stella Point (18,900 ft), you will be rewarded with the most magnificent sunrise you are ever likely to see coming over Mawenzi Peak. Finally, we arrive at Uhuru Peak- the highest point on Mount Kilimanjaro and the continent of Africa. From the summit, we now make our descent continuing straight down to the Mweka Hut camp site, stopping at Barafu for lunch. The trail is very rocky and can be quite hard on the knees; trekking poles are helpful. Mweka Camp is situated in the upper forest and mist or rain can be expected in the late afternoon. Later in the evening, we enjoy our last dinner on the mountain and a well-earned sleep.
7

Mweka Camp to Mweka Gate Elevation: 10,065 ft to 5,380 ft Distance: 10 km/6 miles Hiking Time: 3-4 hours Habitat: Rain Forest On our last day, we continue the descent to Mweka Gate and collect the summit certificates. At lower elevations, it can be wet and muddy. From the gate, we continue another hour to Mweka Village. A vehicle will meet us at Mweka Village to drive us back to the hotel in Moshi.